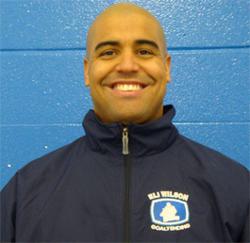 Eli Wilson joined Pursuit of Excellence  as our head Goaltending coach in 2015.  Eli has worked with our goalies over the past 3 years with success in elevating their games and allowing them to move to the next level of hockey. The Pursuit goalies will benefit greatly from the tutelage of Eli and the wealth of experience and knowledge that he brings.

Having elevated the games of current National Hockey League goaltenders Carey Price, Ray Emery, Tim Thomas, Tuukka Rask, Brian Elliott, Jason LaBarbera, and Devan Dubnyk. Eli Wilson has established himself as one of the premier goaltending coaches in the world. His relentless work ethic, vivacious personality, knowledge of the goaltending position and tenacious approach to the game has afforded Eli the ability to build an impressive track record.

Wilson had unprecedented success for four seasons with the Western Hockey League’s Medicine Hat Tigers. While there, Wilson’s goaltenders set new franchise records only to break them again two years later. During Eli’s tenure, the Tigers won two Championships and in both of those runs, the Medicine Hat goalies were named playoff MVP’s.

In 2004, Eli founded the largest goaltending school in Western Canada – World Pro Goaltending. Known as Western Canada’s elite training centre for goaltenders, World Pro teaches a cutting edge compact butterfly style combined with read-and-react skills that focus on making goaltenders more efficient by simplifying their game. Up to his departure from the company in 2009, World Pro Goaltending was performing more than 5000 one-on-one training sessions annually; combined with numerous camps including the world renowned Elite Prospects and Professional (NHL) camps. World Pro Goaltending secured the services of Francois Allaire in 2004 and 2005 for its first 3 day Elite Camps. Eli Wilson was also a major player in the start of Professional Skate Services Goalie Centre, which in its first year was the leading selling retailer of goalie equipment in Calgary. Eli has worked with a number of manufactures of goaltending equipment over the years and has had a major influence in several advancements in goaltending equipment.

In 2004 Eli was named to Hockey Canada's goaltending consultant group along with Francois Allaire, David Marcoux and Sean Burke. Since 2004 Eli has consulted with C.A.A during their summer development camps in Los Angeles CA, this camp is for C.A.A's top young prospects. In 2007, Eli spent a month in South Korea working with the Kangwon Land Ice Hockey team and all the youth goaltenders in the country.

Wilson was the Ottawa Senators goaltending coach from 2007-2010. During his tenure, Eli was responsible for the Ottawa Senators goaltenders as well as for the goalies playing for their AHL affiliate, the Binghamton Senators. In February 2011 Eli was hired by the Anaheim Ducks to work as their goaltending consultant for their affiliate Syracuse Crunch for the duration of the season. They went on to push Ray Emery's return to the NHL and the Crunch had their strongest run of the season while Eli was on staff.

Larry Robinson, has been with the Pursuit Academy for the last 12 seasons working as an assistant coach with the Midget Prep team and goalie coach. Larry, formerly worked as the goaltending coach for the WHL’s Kamloops Blazers as well as West Kelowna and Salmon Arm in the BCHL. He has helped goaltenders move on to the next level like Jackson Whistle, Peyton Lee, Cody Porter and Sean MacGuire. Larry is technical goaltending coach, who has an excellent rapport with his players. Larry will work with the goaltenders in specialized skating and skill sessions on the ice and off ice sessions focusing on reaction time, eye-hand coordination, as well as their passing and stickhandling skills. The Pursuit of Excellence feels very fortunate to have Larry actively involved in our Goalie program.

Cody joined Pursuit of Excellence in September of 2017 as the Bantam Prep Assistant Coach.  In September of 2018 Cody became a Goaltending Coach working with Goalies on and off the ice, as well as video analyst.

Cody Murray was born in Brandon, MB but grew up in Calgary playing pee-wee hockey and bantam AA with the Calgary Blackhawks of the CBHA. He then moved onto playing midget AA with the Estevan Bruins of the SSMHL and AAA with the Tisdale Trojan’s of the SMHL. In 2014 Cody had the opportunity to play at POE with the midget varsity where he was awarded the team MVP and received the most valuable player nominee for the league. Cody was selected by the Weyburn Red Wings (SJHL) out of POE, but was traded to the Selkirk Steelers of the MJHL. Shortly after Cody then returned to Kelowna to play with the Kelowna Chiefs of the KIJHL to finish off his playing career as he forfeits his last year of eligible junior hockey to focus on coaching.