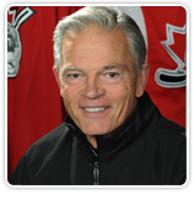 David Roy, President of the Pursuit of Excellence, is one of the most respected skating coaches in the world. David has worked as the skating coach for the Vancouver Canucks, Philadelphia Flyers, Dallas Stars, Canada’s National Team, and the Canada’s Women’s Olympic Team. Each year he and his staff work with well over 2000 hockey players from around the world.

In developing the Pursuit of Excellence program, David made sure that improving every player’s skating technique, speed, quickness, efficiency, and agility was given first priority. The program Dave has developed for skating over the past 35 years is fully implemented in the Pursuit hockey curriculum. In today’s game, becoming an excellent skater, has to be the foundation for every other skill a hockey player develops.

A Few Words From David Roy

Teaching young athletes about the game and about life; having them develop a strong work ethic and values; having them learn to play with heart and grit; and having them believe in themselves, requires a lot more from a coach than just the words he speaks or the x’s and o’s he draws on a board.

The greatest hockey coach I ever played for was Roger Neilson. (22 years coaching in the NHL before he died). Under Roger, you played better than you were, not because of his tremendous knowledge of the game and his coaching ability, but because he had a way of making you believe in yourself. Every game you played, “the lid was off”, in terms of what you could do, because you knew, that Roger knew, you could do it!

Secondly, Roger respected you. He spoke to you with respect and you knew he cared about you as a person, not just a hockey player. He took a genuine interest in you.

Thirdly, Roger walked his talk. He was a coach all the players had the greatest respect for. He didn’t swear. His life demonstrated in every way the same qualities he expected in us; hard work, commitment, integrity, honesty, a total team player, and humility (egos at the door).

These are the very same qualities I look for in our coaching staff for the Pursuit of Excellence Hockey Academy. Not only do all of our staff possess these qualities, many of our staff I have had the privilege of working with for well over 10 years.

Ultimately, our goal as a coaching staff is to inspire players rather than motivate them. We want every player to leave our program driven each day from the inside rather than from the outside environment they find themselves in. In the end, as I say to the players, “the best coach you will ever have is you”.